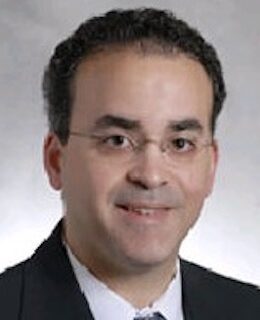 Get to Know Dr. Lebron

Dr. Lebron a native of San Juan, Puerto Rico joined Retina Vitreous Associates in 2000. He obtained a Bachelor of Science with a concentration in biology from the University of Puerto Rico graduating Magna Cum Laude. He earned his medical degree from the University of Puerto Rico School of Medicine on a full academic scholarship and graduating in the top three percent of his class. During medical school he was elected to the alpha chapter of the prestigious Alpha Omega Alpha Honor Medical Society and served as the chapter’s vice president during his senior year. While attending medical school Dr. Lebron was an exchange student at the Ohio State University School of Medicine Ophthalmology Department. During this time he met Amy, an Ohio native who would later become is beloved wife. After medical school, he served a one-year medical internship at the Cleveland Clinic Foundation. He then completed a three-year residency in Ophthalmology at Boston University School of Medicine in Boston Massachusetts serving as co-chief resident. After his residency he completed a two year Vitreoretinal Surgery Fellowship at the University Of Tennessee/Vitreoretinal Foundation in Memphis. Dr. Lebron is a fellow of the American Academy of Ophthalmology and a diplomate of the National Board of Medical Examiners and the American Board of Ophthalmology.

After his fellowship he and his wife moved back to Columbus where they have raised their four children. When not working Dr. Lebron enjoys traveling and spending time with his family and friends. He is a tenor and volunteers as a soloist at his local church as well as church choir. He enjoys the outdoors and traveling in his RV. He is fully bilingual and fluent in English and Spanish.

The doctors at Retina Vitreous Associates have either authored or reviewed the content on this site.

Ready to Schedule an Appointment?